On June 14th, 2022, U.S. Bureau of Reclamation Commissioner Camille Touton provided testimony to the Senate Environment and Natural Resources Committee concerning the need for additional protective measures that could protect the Colorado River System. Specifically, she asked Basin managers to collectively save an additional 2-4 million acre-feet of water, a significant percentage of the Colorado River’s total annual flow.

In response to Commissioner Touton’s request, the Upper Division States and the UCRC developed and adopted a 5-Point Plan, which put forward a number of strategic activities to help improve the Colorado River System, in conjunction with commensurate conservation activities proposed and undertaken by the states of the Lower Basin. The first listed element of the 5-Point Plan is the re-authorization and re-initiation of the SCPP program with the subsequent steps of developing the agreements, legislation, and funding that would enable SCPP activities to take place in the Upper Basin in 2023.

Subsequently, an SCPP funding agreement was approved by the UCRC on November 21, 2022, and delivered to Reclamation for their consideration. The UDS and UCRC anticipate approval and companion legislation by the end of 2022. The agreement includes a commitment of up to $125M available for projects between 2023-2026, but the UDS and UCRC’s current focus is on participation in the 2023 water year.

The official “kickoff” for the SCPP was announced on December 14th at the UCRC 299th Regular Meeting in conjunction with the Colorado River Water Users Association (CRWUA) conference. The proposed participation process begins with the Request For Proposals (RFP) (below) for review by Colorado River water users with established historical water use and availability of use in 2023. After proposals are submitted, the UDS and UCRC will review and select projects for the implementation of SCPP in 2023.

Some important concepts to note about SCPP in 2023:

***NEW*** On January 18th, the UCRC and Upper Division State representatives hosted an online Q&A webinar to answer questions about the re-initiated SCPP for 2023 in advance of the February 1st deadline for applications. Please see below for the recorded informational webinar. The UCRC and UDS also are developing a FAQ. This will be posted on this website by Friday, January 19, 2023. 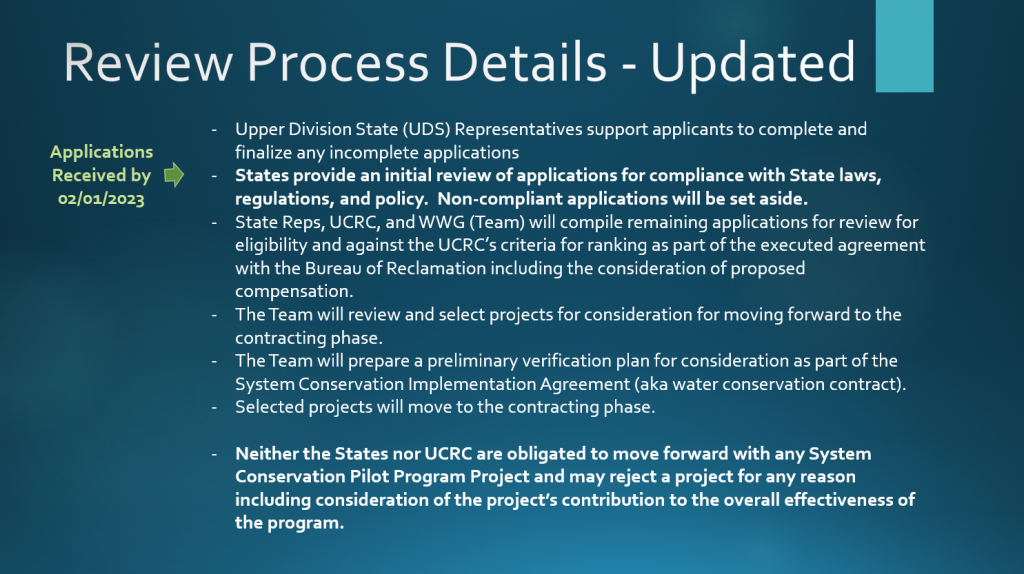 Is the Application for the System Conservation Pilot Program (SCPP) (2023) considered to be the same as the Proposal?

Yes, the Application is considered to be the same as the proposal.

Yes, transbasin water projects are eligible to submit proposals for this program. One key component will be to develop and describe an activity that results in demonstrable conserved consumptive use, can be verified, and is administrable by the State Engineer.  Another key component for water users within a larger system/project is that it needs to be workable and acceptable to the entity(ies) that holds the water rights and distributes the water within that system.

Why is the Lower Colorado River Basin System Conservation and Efficiency Program compensating water users at a valuation of $330-$400 / AF and the Upper Basin is setting a base rate of $150 / AF?

The Upper Basin base rate of $150 per acre-foot was set based on proposals seen during the last round of SCPP, however applicants are welcome to propose a higher value with justification.

Does a conservation effort weaken our negotiation powers with lower basin states? We are already not using our allowance, now we are saying we can use less?

The Upper Division States, through the UCRC, adopted the Upper Basin 5-Point Plan in July 2022 to address declining elevations in Lake Powell and to protect critical infrastructure and health and human safety. The re-initiation of the System Conservation Pilot Program (SCPP) is an important component of the 5-Point Plan. It is one of the tools the Upper Basin can employ as part of its commitment to assist with the protection of the Colorado River System, provided that commensurate and substantial actions and water use reductions are made by Lower Basin entities.

Given the short timeframe to submit applications, will the review team's criteria be shared so we may have the ability to best prepare a competitive application?

The SCPP 2023 Notice of Pre-Solicitation lays out the main criteria that projects will be rated on. http://www.ucrcommission.com/wp-content/uploads/2022/12/SCPP-for-2023-Notice-of-Pre-Solicitation-Request-for-Proposals-Dec-13-2022.pdf.

Will the participants be expected to shepherd the water downstream?

No, the participants will not be expected to shepherd the water downstream.

How will the amount conserved be calculated - by the enrolled Historical Consumptive Use (HCU) amount or by volume stored somehow? Or other?

The amount of conserved water will be based on average HCU for full season fallowing and will take into account average HCU savings for proposed alternate activities (i.e., deficit irrigation, alternative crops).

What precipitation data will be used to be subtracted from the eeMETRIC data? GridMet from OpenET or from local meteorological stations normalized to a growing season?

Generally, a nearby non-irrigated area will be selected and ET for that area will be subtracted from ET of the irrigated field. Please contact your state representative if you would like further information or help. Note that while we are striving to calculate water conserved similarly across all states, some projects may require different methodologies depending on the data available.

Being a federal action, will the effects of this program need to be assessed through an EIS?

Changes in water use for conservation purposes do not require an EIS. Also, the SCPP does not propose any changes to federal facility operations.